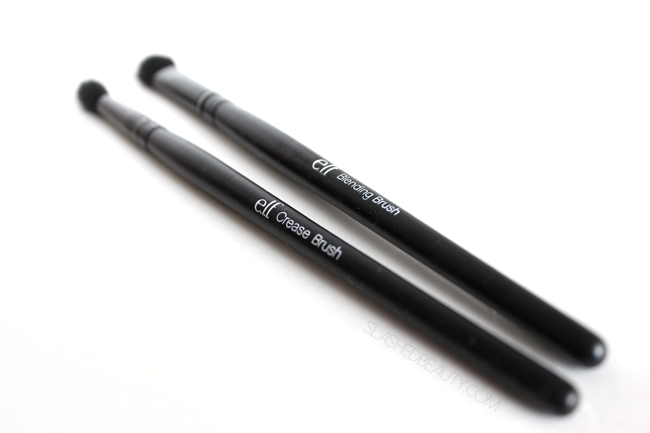 In the past few months, e.l.f. finally added a couple new brushes to their studio line: the blending brush and crease brush. I’ve talked about the blending brush in a previous video, but I specifically wanted to compare these two. Depending on your makeup routine, you may want one over the other– or both! 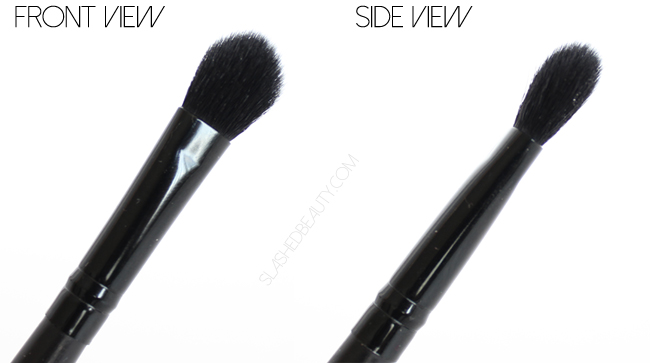 Let’s start with the Studio Blending Brush. This is a particularly unique blending brush to e.l.f. in that it has a pinched barrel to flatten out the bristles. The shape allows it to place color easily into your crease or onto your lid. It’s still pretty dense and fluffy, but basically resembles a huge shader brush. It has enough flexibility to blend well, mostly in a side-to-side motion.

I originally said that while this brush has a specific job in my routine (mostly placing color directly into the crease and softening that line), I prefer something a bit rounder for a regular day to day blending brush. 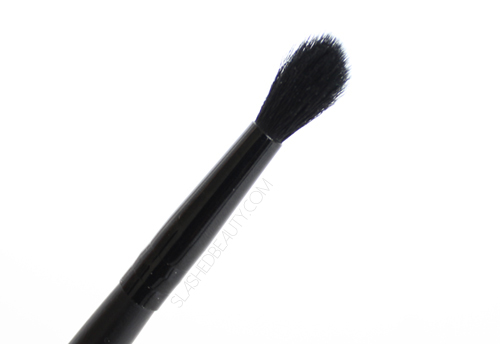 A couple weeks ago, e.l.f. followed up with the new Studio Crease Brush. This is a thin brush with long bristles that taper to a slight point at the end. The barrel of the brush is round and the bristles are flexible, which makes for easy circular blending to achieve a diffused look. Since it’s rather small, you’re able to place color exactly where you want it. This brush, to me, is what I consider to be a blending brush… just a bit narrower.

So which brush should you get? Well, in theory, you could really purchase both for different uses since they’re so affordable. But if you’re really trying to narrow it down, here’s my overview: 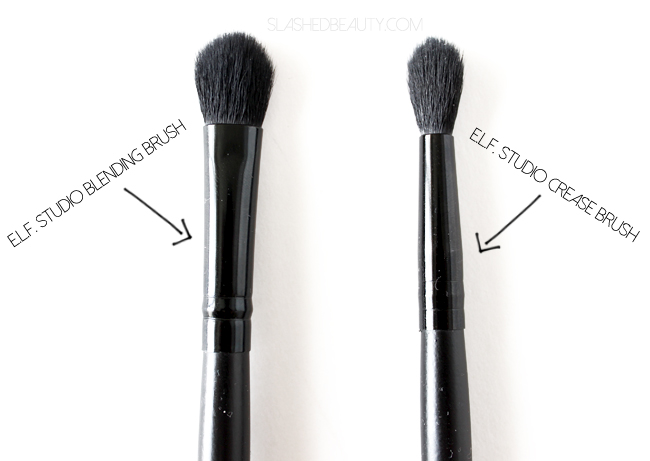 You’ll like the Studio Blending Brush if you tend to blend in a windshield wiper motion. It can also double as a large shader brush for applying shadow to the lid. Because of the flat shape, this brush doesn’t stop at eyeshadow— you can use it to blend out concealer under the eyes, too. If you want a multi-purpose brush, this is it!

You’ll like the Studio Crease Brush if you blend in circular motions like I do. It’s small and tapered enough to blend color precisely into your crease, as well as the lower lash line. This one is easier for me to work with when blending out transition and crease shades because of the shape.

The e.l.f. Studio Blending Brush and Studio Crease Brush both cost $3 each. I will say that they are both getting a lot of use in my makeup routines, lately.

Do you have a preferred shape when it comes to blending brushes?