Body Dysmorphic Disorder (BDD) is an invisible struggle of sorts. Those who suffer from this mental health condition fixate on a flaw in their appearance which is usually minor or nonexistent. Even though most people are conscious about the way they look, people with BDD often withdraw from everyday activities and interactions because they feel so ashamed of their appearance. Since the flaw is exaggerated or completely manifested in their minds, it can be hard for others to understand or take the condition seriously. Some people use plastic surgery to help “fix” what they think is wrong with their bodies, but satisfaction is rare because of the extreme self-consciousness they feel (Mayo Clinic).

English artist, Leigh de Vries, developed BDD in her early teens. She began isolating herself at home, convinced that she’d scare the public with her appearance.

This is what BDD causes her to believe she looks like: 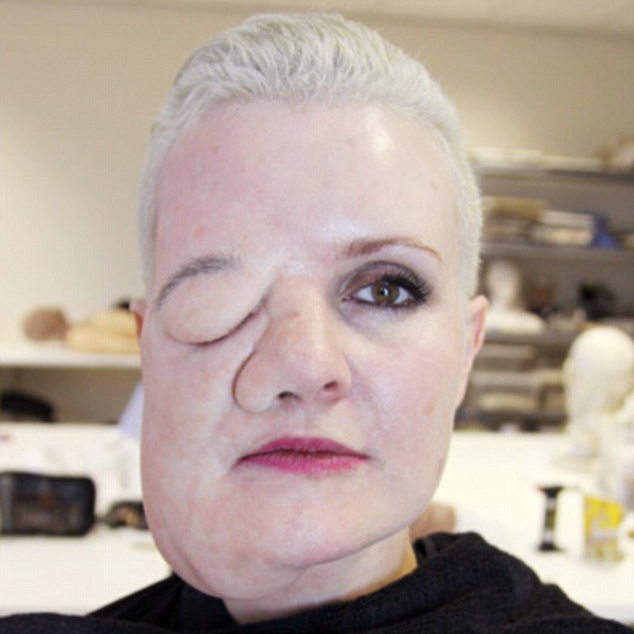 The second photo is part of de Vries’ art installation, Exposure: The Broken Reality Tunnel which is sponsored by Arts Council England and aims to educate others about Body Dysmorphic Disorder. The mixed media exhibit debuted at the Old Market Gallery in Rotherham on September 26th, and is touring England in 2016 with hopes to go global in 2017. de Vries is also taking the opportunity during the exhibition period to engage in Youth Outreach workshops and talks to raise awareness of BDD.

“Creating awareness by constantly questioning the world around you [opens up] dialogue to different perspectives and new ways of seeing things and yourself. I really want more people to know what BDD is so that we can have more understanding around it, and so that it doesn’t end in suicide as it has for a number of BDD sufferers,” she told me in a personal email.

Exposure: The Broken Reality Tunnel is an immersive experience that features projected video footage in a custom designed maze. By manipulating senses with blacked-out passages and audio engineered sound elements, participants are virtually living out what it’s like to walk around as someone with BDD. See a preview of the video below:

As part of the project, de Vries teamed up with makeup artist Shaune Harrison to create a prosthetic tumor that weighed down one side of her face, a manifestation of how she actually perceives herself to look like. With hidden cameras, she went about town walking the streets and riding public transportation, capturing her isolation and the reactions from the public as she passed. de Vries says the experience helped her perception of herself greatly, and upon taking the prosthetic off she realized she was beautiful for the first time. She told me:

At the time of the project, I was at my wit’s end with my BDD, and felt that the only option I had moving forwards was to create a physical situation to experience how I felt about myself. I think that was the biggest help for me– I got it out of my head. I then had a comparison to create a more realistic judgement of myself from. Also, up until that point, I had been incredibly secretive about how distorted my self image/idea of myself was, so I guess again by being honest (allowing myself to be vulnerable in this way) added to the cathartic experience. People have the perception that vulnerability is a weakness, but being vulnerable means that you are not covering up wounds, but rather exposing them so that they can heal.

At the end of our correspondence, I bring up the possible relationship between BDD and our reinforced standards of beauty through media. She posed the following questions that she feels strongly about, and hopefully will open the eyes of those passively accepting these standards:

Are these relatively new conditions like BDD a manifestation of what we have been sold as society to live up to in order to be accepted? As a human race why are we always sold the wrongness of us? Why are we not encouraged to feel more powerful– more beautiful– more whole? With the voices that are selling us this “distorted self,” are they making money out of it– and if so, why are we so fast asleep that we are not aware of what is going on?

Learn more about Exposure: The Broken Reality Tunnel, and find resources for your or someone you know with BDD on the official website.

Even Celebrities Don't Want to See Photoshopped Versions of Themselves
#WTFLaneBryant: Is the I'm No Angel Campaign a Joke?
Seven Things You Didn't Know About Pixiwoo’s Sam Chapman
Review: Fat Girl Walking by Brittany Gibbons