As someone who doesn’t care for the typical horror, blood and gore movies that dominate the month of October, The Nightmare Before Christmas became my favorite Halloween movie. It’s only a little spooky, but very musical and fun. I even starred as Jack Skellington in my drama camp’s production of the show as a kid!

Needless to say, when the Makeup Revolution Nightmare Before Christmas collaboration landed in my mailbox last week, I was both stoked… and skeptical. I’ve been pretty underwhelmed with the execution of recent makeup/movie collaborations in the past couple years. With the exception of few, they always seem like a cop-out— slapping movie artwork on random products that don’t really connect back to the theme of the collection. I was worried that this collab would be the same, despite the awesome packaging. Luckily, I didn’t need to worry! You can check out the collection as a whole in my video at the top of this post, but what really impressed me was the Makeup Revolution Nightmare Before Christmas Jack and Sally palettes. 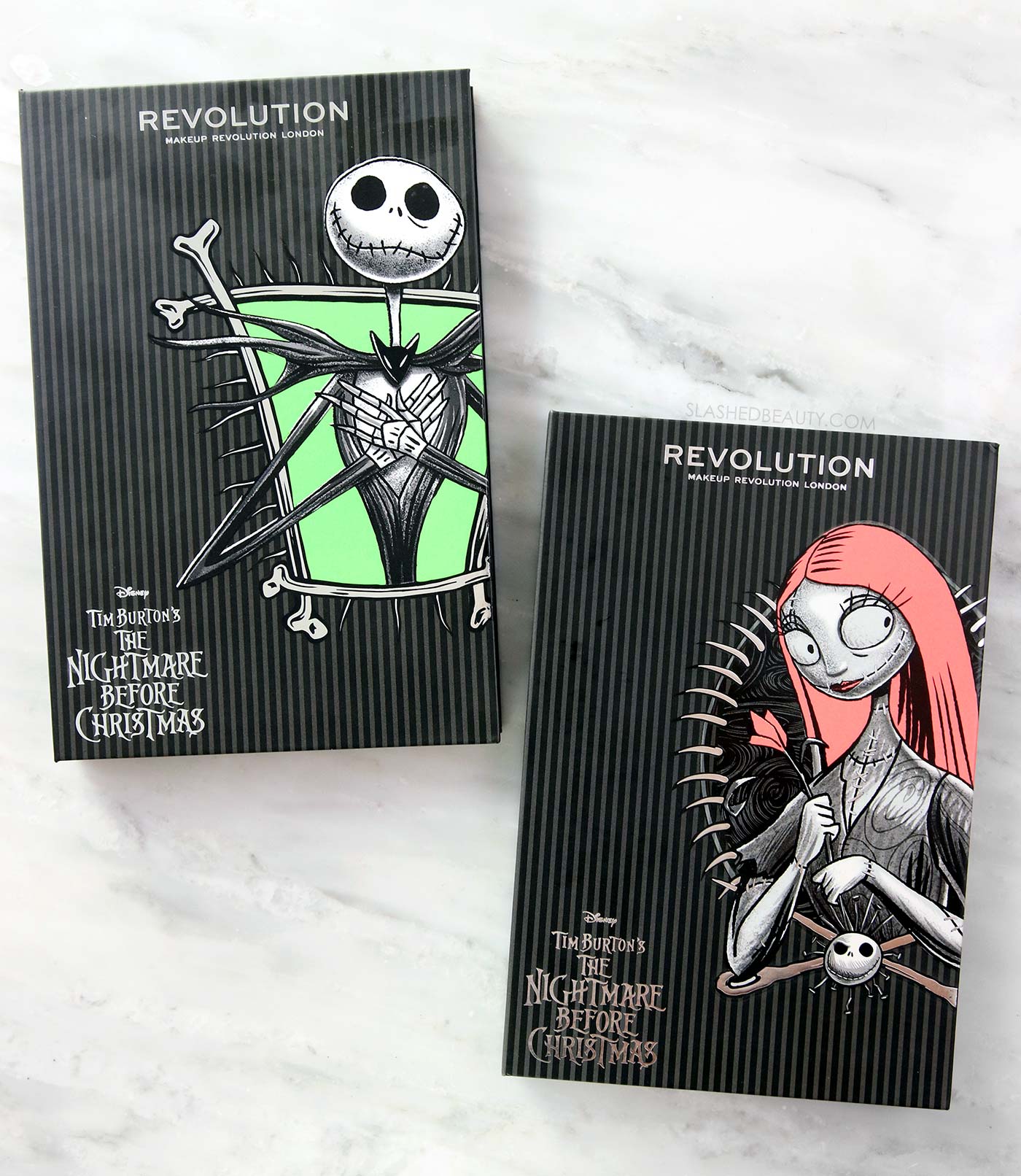 Each palette has 36 shades with a mix of mattes, satins, neutrals and bright pops of color. The mix of colors allows you to go bold or subtle. I love this choice, since it makes the palette more versatile and I can grab it no matter what look I’m going for.

The element of the palettes that really took me by surprise, though, was the attention to detail in pairing shade names with colors. You can really tell that they designed this for fans, as the names make sense with what shades they describe. For example, Soup in the Jack palette is a shifty green, an exact match for Dr. Finkelstein’s favorite Worm’s Wort soup. The shade called Dr. Finklestein in the Sally palette is a matte gray, just like his tower and the color of pretty much everything inside. What’s This is a snowy silver, reminiscent of the song Jack sings when he discovers snow and Christmas for the first time. Sally is pale blue, like her skin. All of these details are much-appreciated as a fan, because it’s clear that the brand put thought into designing not only the exterior packaging, but following through with the movie theme.

The Jack palette is the more bright of the two, with the left side of the palette being almost all neutrals and the right side featuring bright colors. The Sally palette, on the other hand, has more of a rosy theme with pops of purple, green and orange but is a lot more neutral overall.

Across the board, the satin shades in both palettes were smooth and extremely pigmented in one swipe. They also blend together really easily while staying vibrant. Watch out for the darker colors, though, as some of them have quite a bit of fallout.

The mattes on the other hand were a bit hit or miss. Most of them needed to be layered up, but you can build them up by packing the color on in a patting motion. They do translate very true to the color you see in the pan, which I appreciate. However, some of the mattes can be a little tricky to blend out once you’ve built up the pigment. You can get them softened up, it’ll just take a little bit of effort and the right brush. Not a total dealbreaker, but they’re not my favorite matte shadow formula.

For $22, I think you do get a lot to play with in these palettes, and you’ll be able to grab them year round as they’re so well-balanced. Especially if you’re a Nightmare fan, these will be a fun addition to your collection.

You can find the Makeup Revolution Nightmare Before Christmas palettes online.