Last Novemeber, my husband and I decided to try Coolsculpting to help target stubborn pockets of fat that were resistant to our regular exercise routine and diet. Over the past two years, Adam lost eighty pounds, and I’ve successfully kept off about thirty that I had lost in college. However, we both still had parts of our body that made us feel self-conscious. 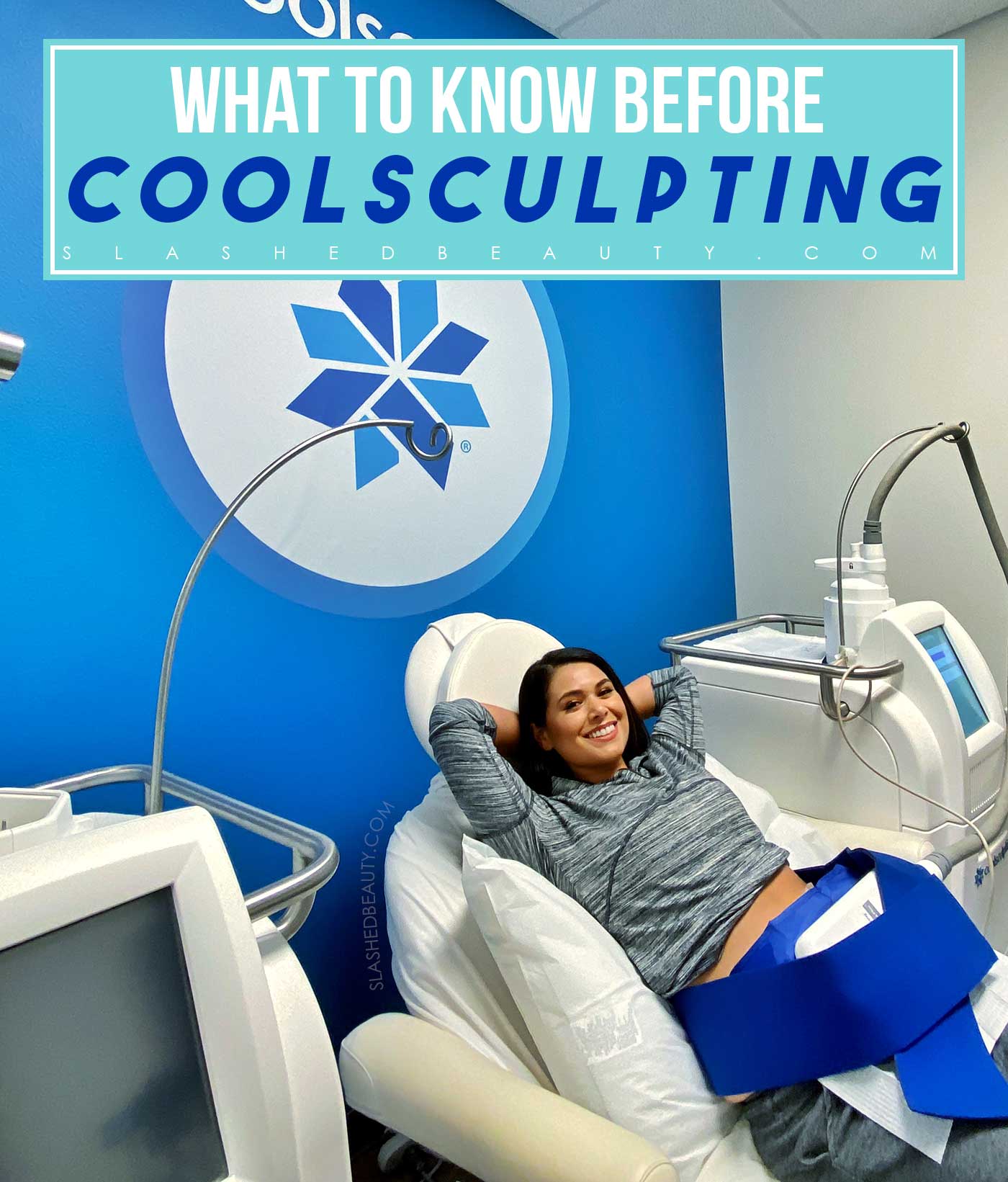 For me, it was my lower belly. No matter how much weight I lost, it would still protrude out farther than my upper abs. Clothes that “should” have fit after my weight loss still didn’t fit right because my abs weren’t proportionate. Adam felt that his love handles diminished his success as he still felt uncomfortable in jeans even when downsizing. So, we turned to Coolsculpting for a little help. We had our treatments done complimentary with Dr. Jeffrey Roth here in Las Vegas, and had an amazing experience.

Check out my before and after! We had two treatments each on our target areas, and the results are incredibly satisfying. My lower belly no longer pushes out farther than my upper abs, so clothes like high waisted jeans and bodycon dresses are so much more comfortable. In general, I just feel like my lower belly has now “caught up” with the progress I made in the gym with the rest of my overall fat loss.

Adam’s Coolsculpting before and after is no less impressive. He took a bit longer to see clear change, though. After two treatments (the middle photo) you could definitely see some change, but it wasn’t until a full three months after our last treatment that his results were obvious. His flanks are flatter as well as more symmetrical. I want to point out that we didn’t change anything about our exercise routine or diet during this process, in fact I actually gained weight since it was around the holidays!

So does Coolsculpting work? From our experience, and from what you can see above, yes. It worked well for both of us and we’re happy with the results. If you’re considering it, though, there are a few things you should know before starting Coolsculpting.

Coolsculpting can take 1-3 months to show changes, and up to 6 months for final results.

Coolsculpting requires patience. The process, called cryolipolysis, breaks down fat cells by freezing them, then eliminating them from the body through the liver. It takes weeks for this to happen, so changes in your appearance will be slow and gradual. This is why it’s so important to take before photos— you might not notice a difference from looking in the mirror every day! In fact, Adam swore he wasn’t seeing results at all until he saw his side-by-side photos, which amazed him.

Coolsculpting can help eliminate 20-25% of fat in target areas, and it’s best to focus on smaller bulges that don’t seem to be affected by diet and exercise. It’s not the route to take if you want more drastic results, or want larger areas treated. Coolsculpting is only more affordable and convenient than surgery if you stick to these smaller areas.

Prices vary depending on your target area.

While Coolsculpting is generally more affordable than liposuction, it’s important to understand the costs. The price may vary depending on where you get the treatment done, but the general pricing structure is standard. You pay per application area, starting around $600. For my lower belly area, I only used one applicator per session and went in for two treatments, so my cost would have been $1200. However, since Adam used two applicators on either side of his body for his love handles, his total would have been double that of mine. 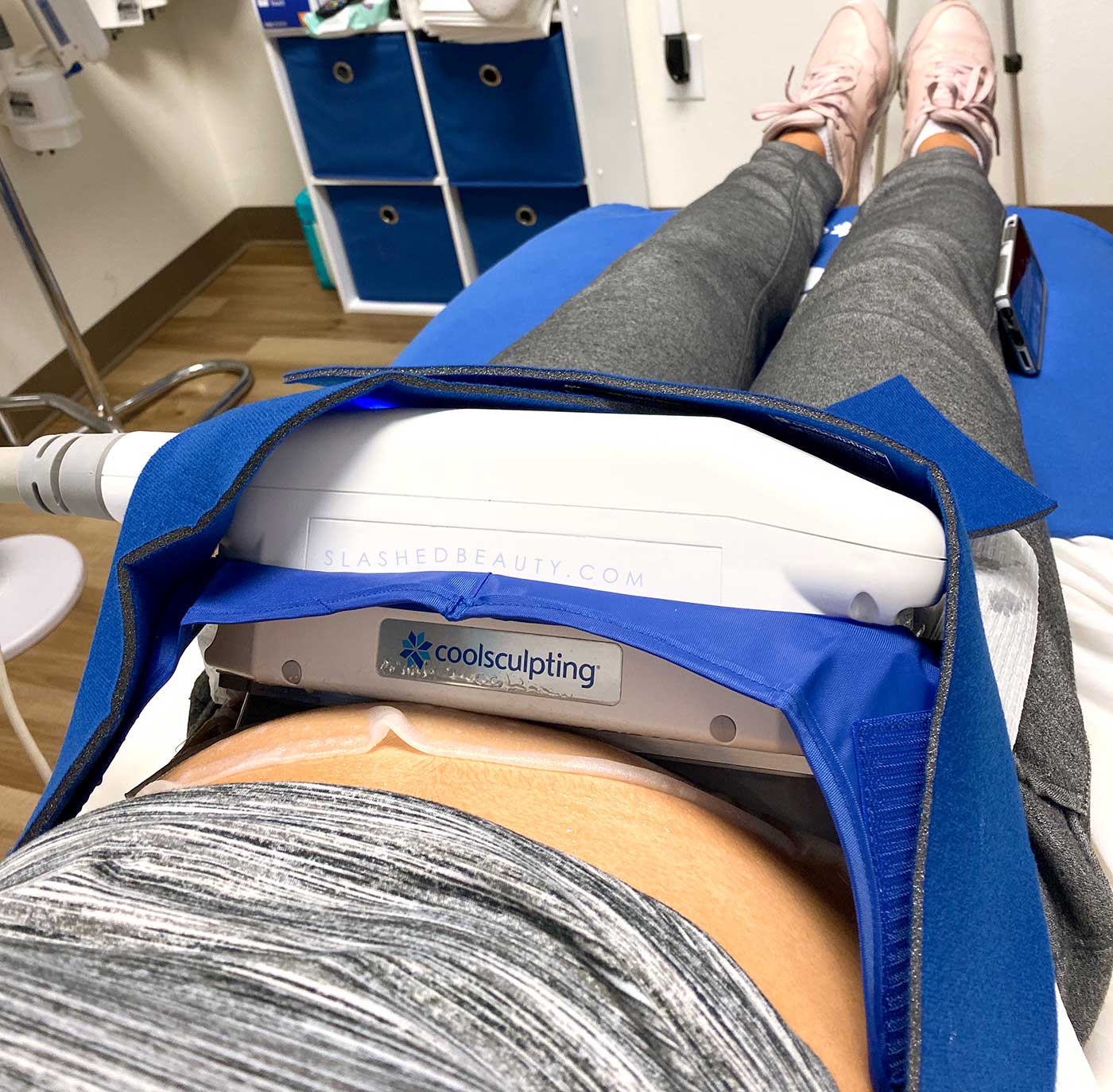 Coolsculpting may cause discomfort.

The applicator used during Coolsculpting uses both suction and very cold temperatures, which can be a bit uncomfortable. Personally, it felt similarly to the sensation of putting a bare hand in snow until it’s numb. After your treatment, you may be sore for a few hours up to a few days. Adam’s treatment areas were tender to the touch for a couple days after the first session, but not as much our second time around. I’ve heard some stories of bruising from the suction— we didn’t experience that, though the areas were red for a few hours afterward.

You can get Coolsculpting in Las Vegas for a discount!

Dr. Roth was gracious enough to offer a discount for Slashed Beauty readers to try Coolsculpting for themselves! Whether you’re a Las Vegas local or you have a trip planned for Sin City soon, you can get 15% off each cycle at their office. It’s recommended to do two cycles per area for maximum results, but with no downtime required, you can do them back to back! It’s definitely worth driving off-strip for these savings. Just mention this blog post when booking your appointment to receive the discount. Get more info on his office here. This discount is valid through September 2020.

Have you ever considered Coolsculpting, or tried it yourself?