I’m not one to get sucked into the hype of celebrity or YouTuber collabs with beauty brands. They just rarely seem exciting enough to rush out and buy them before selling out. However, when I received a recent package from Ulta Beauty, I’ll admit that I was pretty excited to see the Too Faced I Want Kandee collection inside. 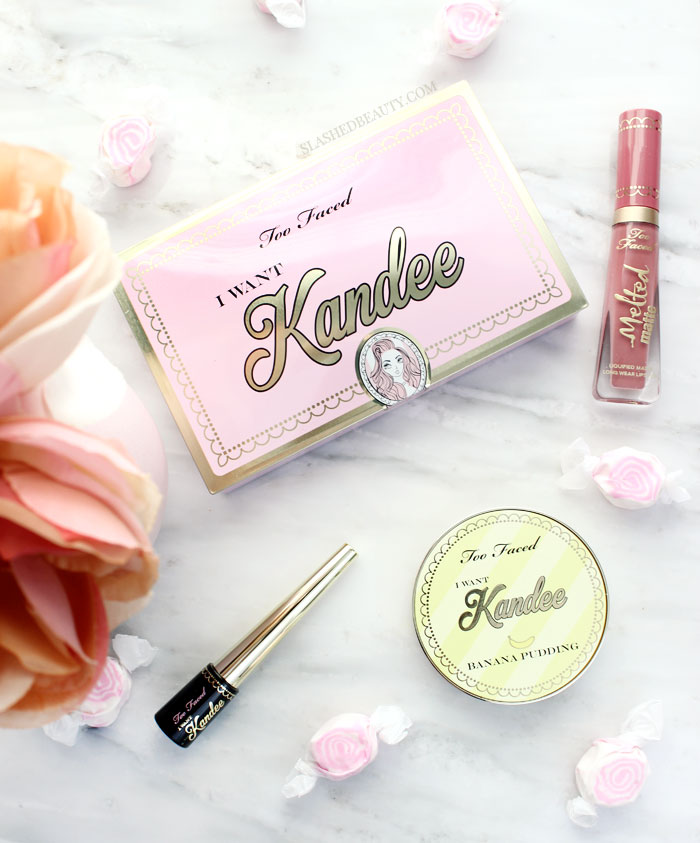 The limited edition collection is a partnership between Too Faced and the OG beauty guru herself, Kandee Johnson. Kandee has been gracing YouTube with her positivity and makeup skills since the early days, and she’s one influencer I’ve grown to trust over the years. Especially having worked as a professional makeup artist, I had a feeling this collaboration would have more of a personal touch.

The I Want Kandee collection consists of five products, four of which I have to share with you today. 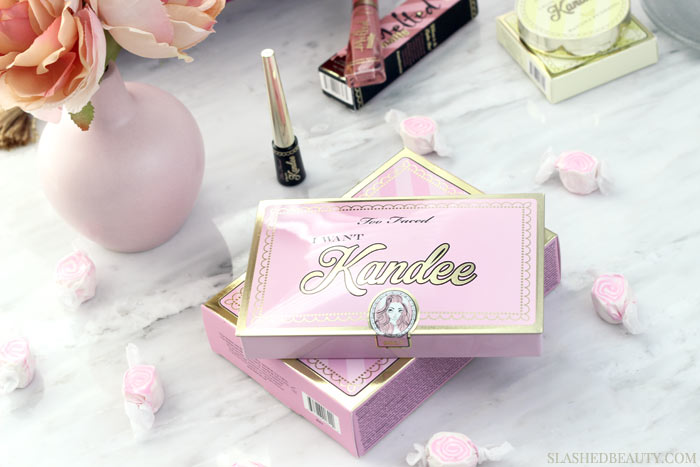 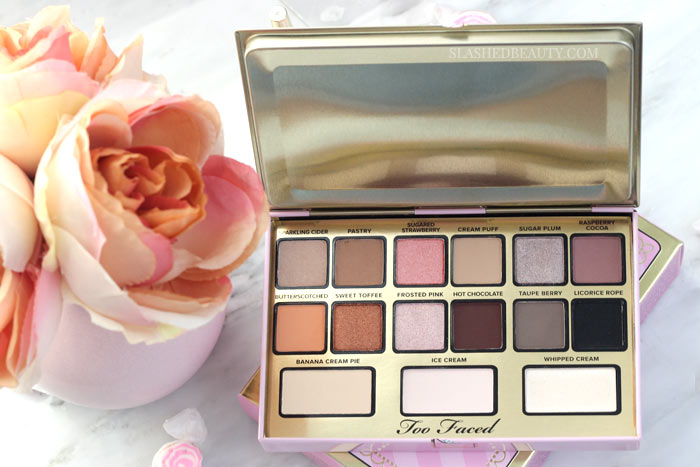 The product I was most excited to play with was the I Want Kandee Candy Eyes palette . The fifteen shade palette, housed in cutesy tin packaging, has three shade clusters to achieve some of Kandee’s signature looks. It comes with an insert with step-by-step tutorials on how to use the shades together, though you certainly have enough variety to get creative. I was immediately impressed with how well thought-out the shade range was— you can definitely see three distinct color schemes with a great balance of finishes. However, the three sections aren’t so far off from each other, so mixing and matching is made easy. I’m particularly feeling the left side for fall looks, though I bring in Hot Chocolate and Raspberry Cocoa to help compliment the shades. 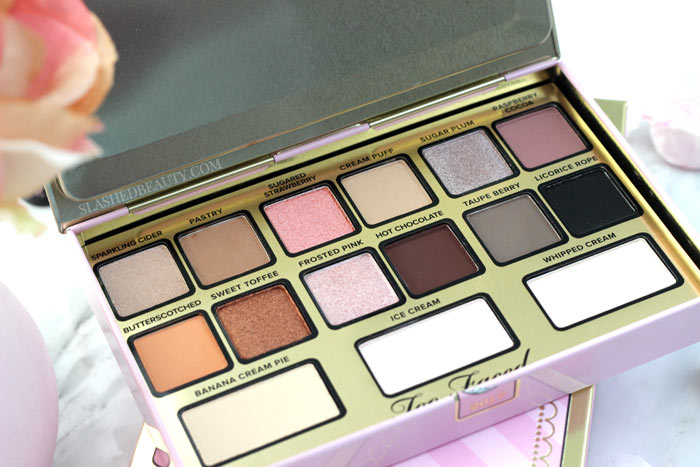 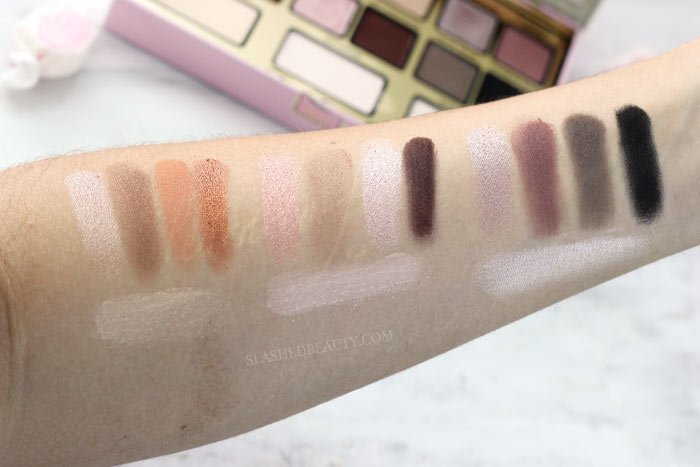 As I’ve come to expect with Too Faced eyeshadow, the formula is pretty spot on. You get really great pigmentation with minimal effort needed to build. I only found the lightest matte shades, Banana Cream Pie and Ice Cream, to be slightly sheer and powdery. However, I’ll be using these as highlight shades anyway so I don’t mind that they’re more subtle. With primer, I don’t experience any creasing from either the shimmers or mattes— another reason Too Faced makes some of my favorite high-end shadows. And yes, the shadows smell like candy. The only drawback is the tin packaging that is domed on top, which makes it bulky and not convenient for storage or travel. 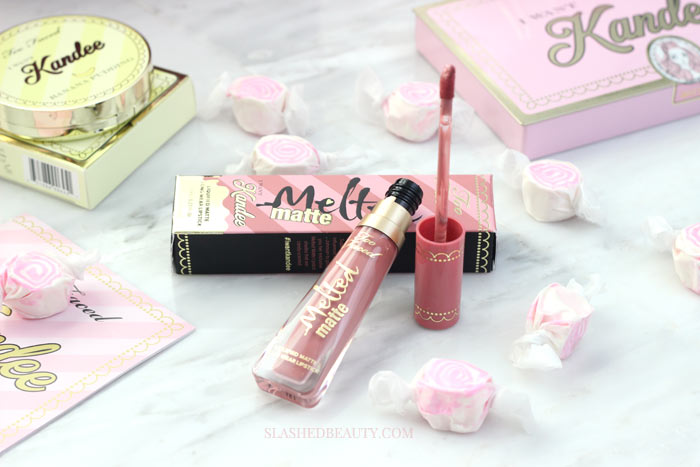 Next up from Kandee’s line is the selection of limited edition shades of Melted Mattes . They’ve released four new colors— two on the more neutral shade and two bold. I have Freshly Baked, which is a light pink that’s neutral enough to match a ton of looks, but bright enough to hold down the face on its own. Kandee’s favorite is Sweet N Sour, a warm red that makes a statement. As a fan of the original Melted lipsticks, I also really enjoy the matte versions— they are slightly drying but last very well on the lips, and have that true flat matte finish. The wand applicator is also a lot more precise than the original Melted lipsticks, which I appreciate.

Unfortunately, the two products I was most skeptical about ended up meeting my low expectations. 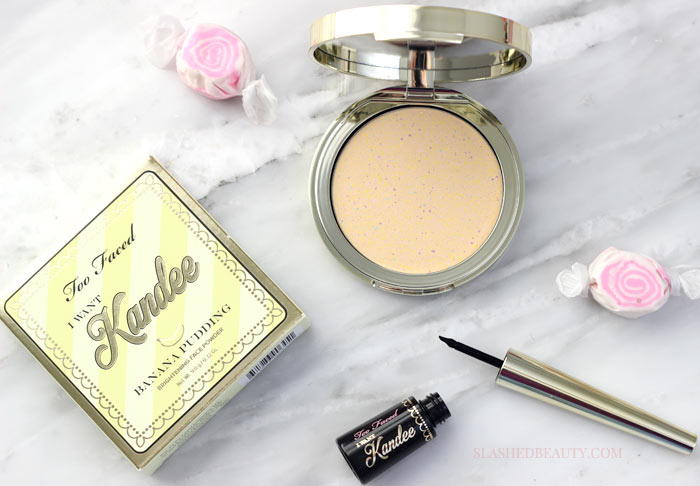 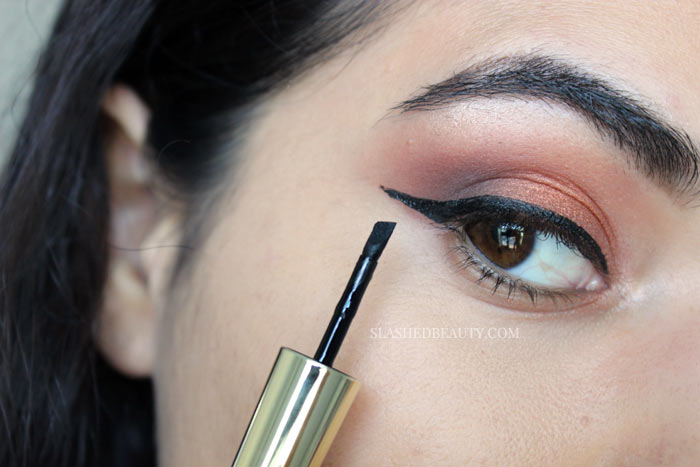 I really wanted to like the Candy Liner — I’m a sucker for a deep black liquid liner that can help me achieve my go-to cat eye. But as soon as I pulled the applicator out, I had problems. The felt tip applicator came out with so much product that had I just touched my lid slightly, we would have had a pool of black. Alright… wipe some liner back into the tube— easy enough right? Well, it didn’t seem like the applicator was absorbing any of the product, which helps with depositing a steady amount. So when I wiped off the excess, it didn’t hold on to enough for a smooth, skip-free line. How frustrating! Furthermore, the tip is very rigid and rather blunt, making my winged liner impossible without having to clean up with concealer to create my point.

The other let-down was the I Want Kandee Banana Pudding powder . Kandee talked this up on her YouTube channel, saying how it brightened and smoothed the under eye area by reflecting light and color correcting. Unfortunately, it accentuated my under eye lines and made my skin look dry. It was just not a good look and I had to salvage my face with setting spray.

The last product in the collection is the I Want Kandee Candy Glow highlighter , which I don’t have. It’s a cream stick luminizer that offers a sheer pearl-like glow.

Overall, if you felt like you need to grab something from this collection— whether you’re just craving something new or you are a big fan of a Kandee— I would snag the eyeshadow palette, then a Melted Matte. The others just seem so hit and miss across reviews.

You can find most of the products at Ulta Beauty , and the rest on Too Faced’s website.

Have you grabbed anything from the I Want Kandee collection?