In the past couple of years, a few campaigns have risen to critique the beauty ideal of our culture. You might be familiar with one in particular called Stop The Beauty Madness. Their ad campaign went viral earlier this year when they released images paired with thought provoking captions that commented on the warped perception of beauty. 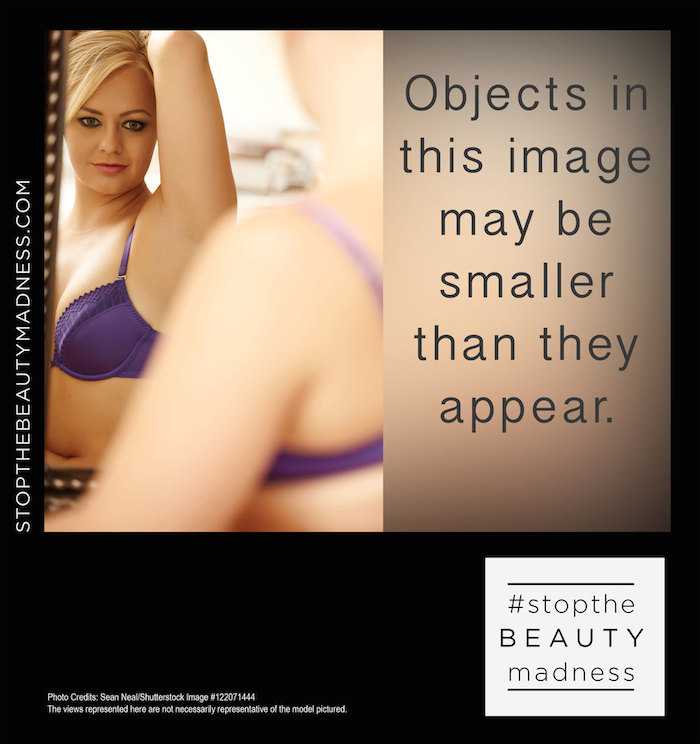 “After all this time and all of the accomplishments and successes that women have experienced throughout history, this we still struggle with,” says Lisa Meade, one of the women behind the campaign, about the pressures on women to feel beautiful enough. “We decided we needed to have important conversations about this with all women, to bring to light what we are experiencing, to realize no one is alone in these feelings, and to see if we could uncover what to do about it.”

Over the summer, the folks at Stop The Beauty Madness opened the floor with a poetry slam contest to regular women, giving them the opportunity to share what they had to say about how they felt about themselves, the standards they are held to, and feeling beautiful.

“Ongoing Battle” by Ora Kohl touches on the struggles of dealing with an eating disorder in a passionate, furious way. She comments on the shame eating brings some women, while not eating is seen as self control. The poem criticizes our thin-obsessed culture and how the mindset affects the body image of women everywhere.

“A Love Letter to My Cellulite” by Ari Eastman takes on an intimate apology to her own cellulite. Comparing herself to a “terrible friend,” Eastman explains that her cellulite has done nothing wrong to deserve the hate she feels for it (“It’s not you, it’s me”). She pushes the blame onto the media for influencing her to be ashamed of a part of her own body, and admits that it will be a while until she will be able to learn to love it.

“When Did Self-Love Become Shameful” by Alicia Marie Foster might be my favorite of the poems. In her soothing voice, Foster shares what she likes about the way she looks— perhaps an act that has become far too uncommon among women. She asks us why self-love translates into being self-centered, and why we are not taught to appreciate our unique characteristics.

Stop The Beauty Madness is continuing the conversation with their FrontLine Voices audio series, where you can hear interviews featuring powerful, accomplished women tackling the issue of the beauty ideal, self love, and body image. You can get the audio series, as well as listen to other poems from the poetry slam on their campaign website.

What do you think it will take to #StopTheBeautyMadness?