When my friend told me about a local luxury fashion resale boutique here in Vegas, I knew I needed to check it out immediately. She had scored on so many awesome finds, and I wanted to get in on the fun! I made a beeline for the glass case full of designer products, and spotted a few Louis Vuitton items I wanted to inspect more closely. Unfortunately, I was able to identify that all of the products I pulled were indeed fakes. One belt almost had me fooled— and I even took it home— but upon further investigation later, I ruled it counterfeit as well. Dang! 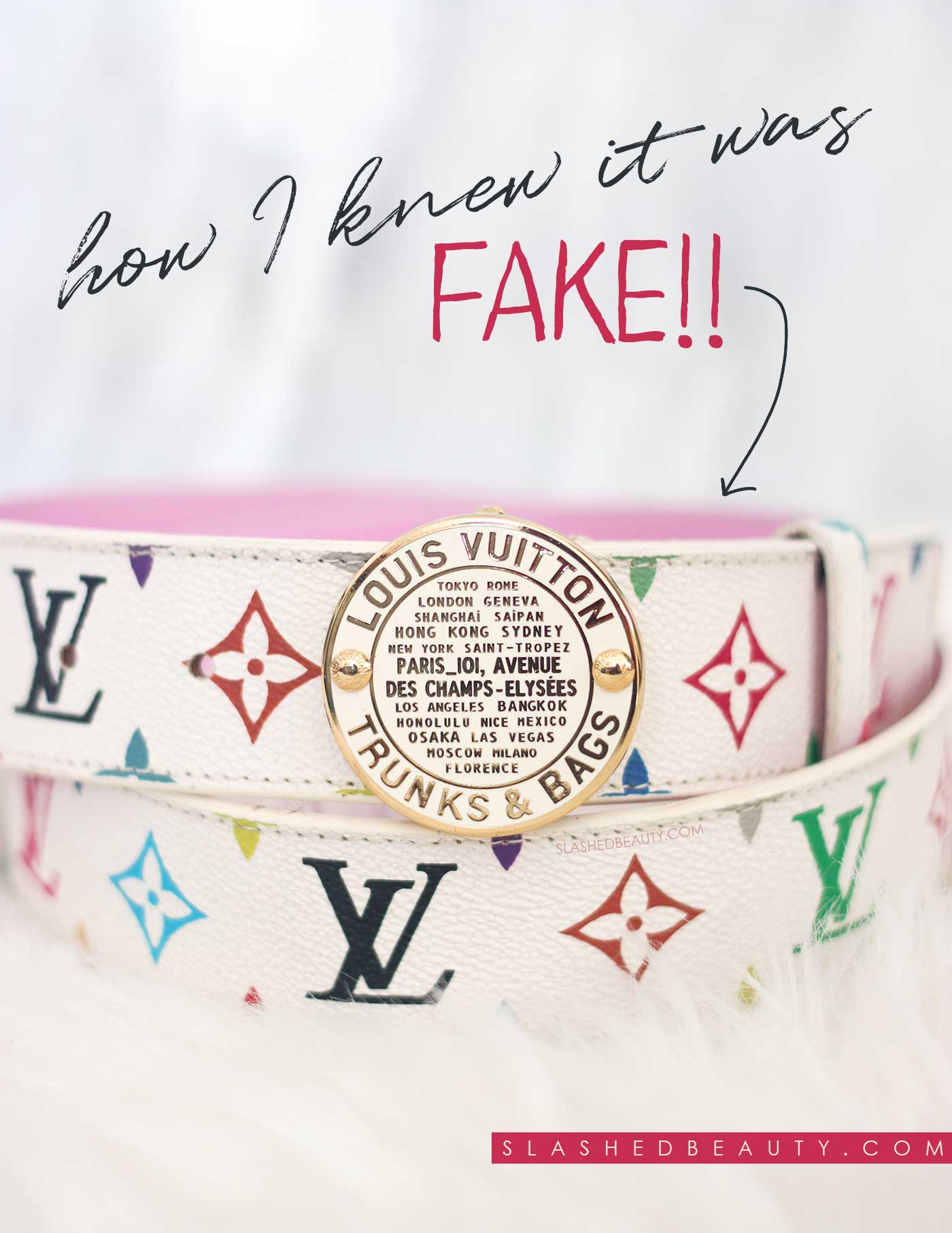 But, at least I can turn it into a learning experience and pass on the knowledge of how to tell a fake Louis Vuitton belt so that you don’t make the same mistake. Keep reading to discover the steps I took to determine it was a fake, and also what I missed that could have helped me avoid wasting money!

Disclaimer: I’m not an expert, these tips are only from experience and may help you identify a fake Louis Vuitton belt on your own. They’re not foolproof, but may help in a pinch.

How to Tell a Fake Louis Vuitton Belt by Appearance: 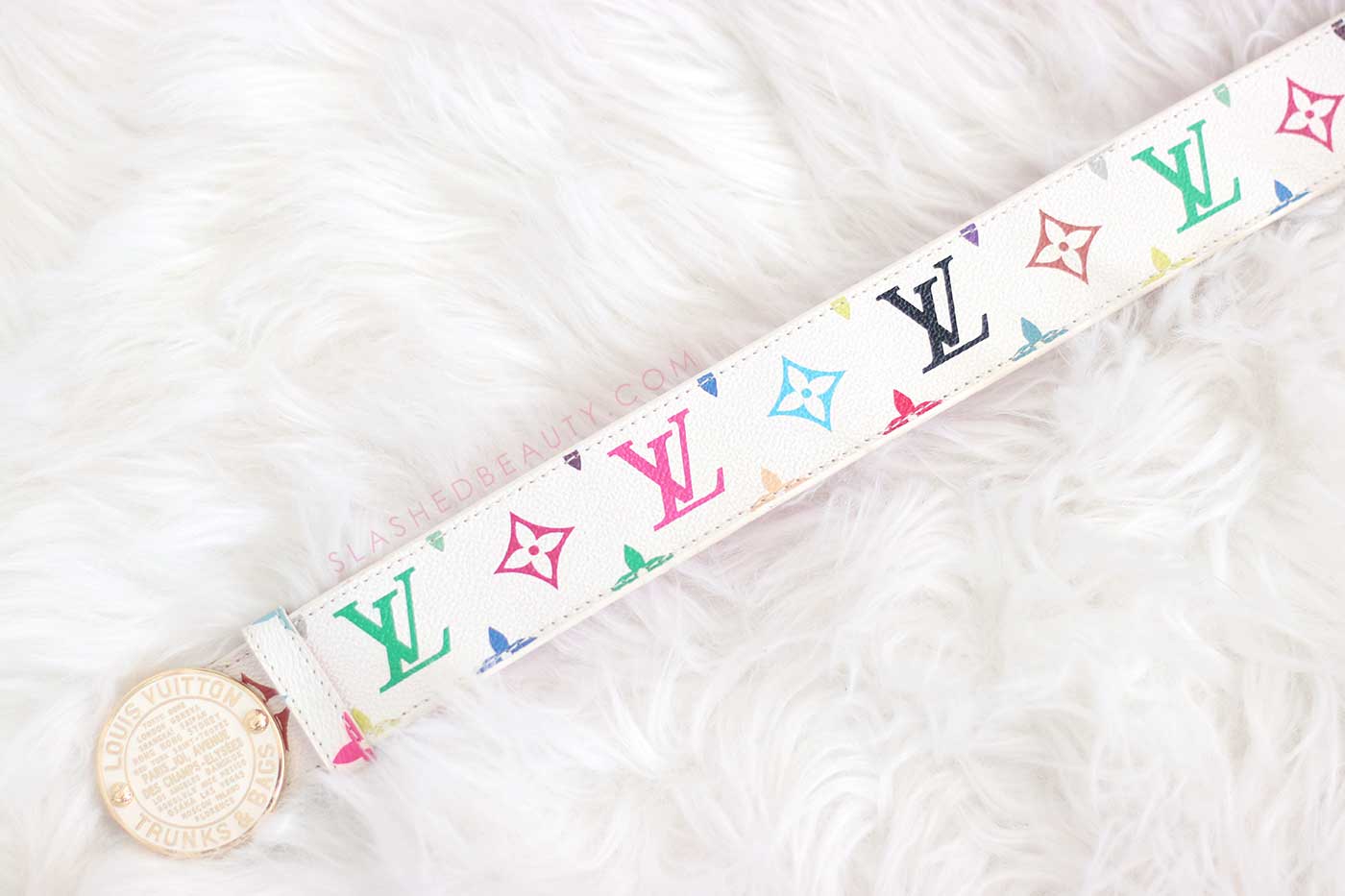 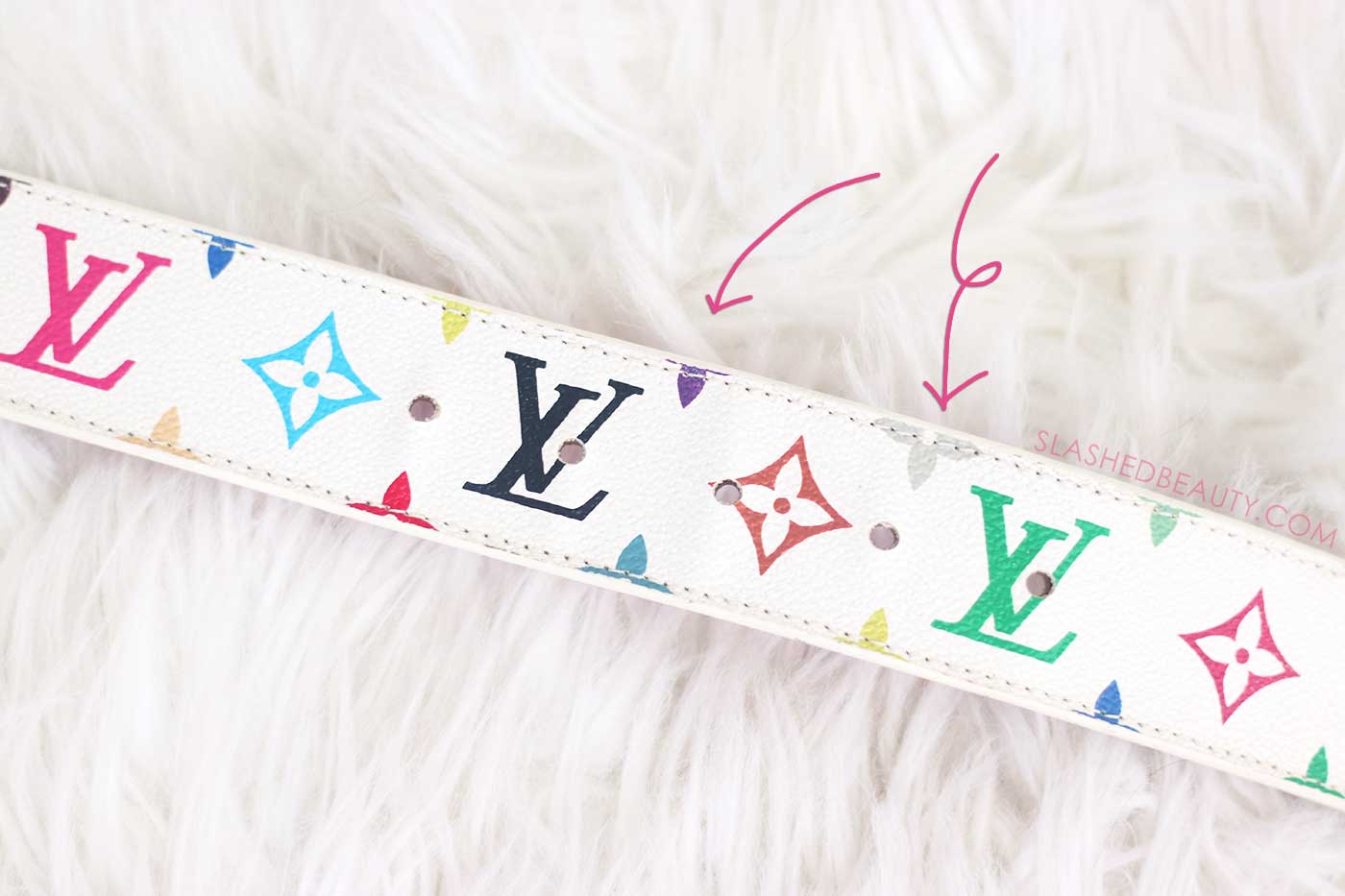 Pattern Alignment: The pattern on a real Louis Vuitton belt will be even with the monogram centered from end to end. While this seems pretty obvious, it’s the glaring clue that I actually missed when purchasing this belt. As you can see on the belt I purchased, the pattern becomes uneven at some points where more of the flower is shown at one or two spots. This should have been a dead giveaway, and I’m kicking myself for not catching it.

Brand Stamp Details: Look for the brand stamp, which should be centered on the back of the belt and read “(R), Louis Vuitton, Paris, made in ___”. If any of this is mispelled, you have yourself a fake. One belt I looked at in the store said Made in Frane. The devil is in the details, though. You can spot a fake Louis Vuitton logo by looking at the “O”s in the name. The real logo uses a font where the letter O looks like a perfect circle, while fake logos will use a font that looks more oval. The words “made in” should be all lowercase, with the country being capitalized.

How to Tell a Fake Louis Vuitton Belt with Google:

If you have your smartphone on you, there are a few extra steps you can take to help you make a judgement call. This involves finding the model number and date code on your belt, which would both be printed on the back. If there’s only one code without the other, it’s a fake!

Look up the Model Number: The model number will start with either an “M” or “N” followed by 4-5 numbers. You can literally Google “Louis Vuitton Model Number XXXXX” to see if the right item pops up. I’ve identified fake bags by searching the model number online, only to see that it matched to a completely different item. Nice try! 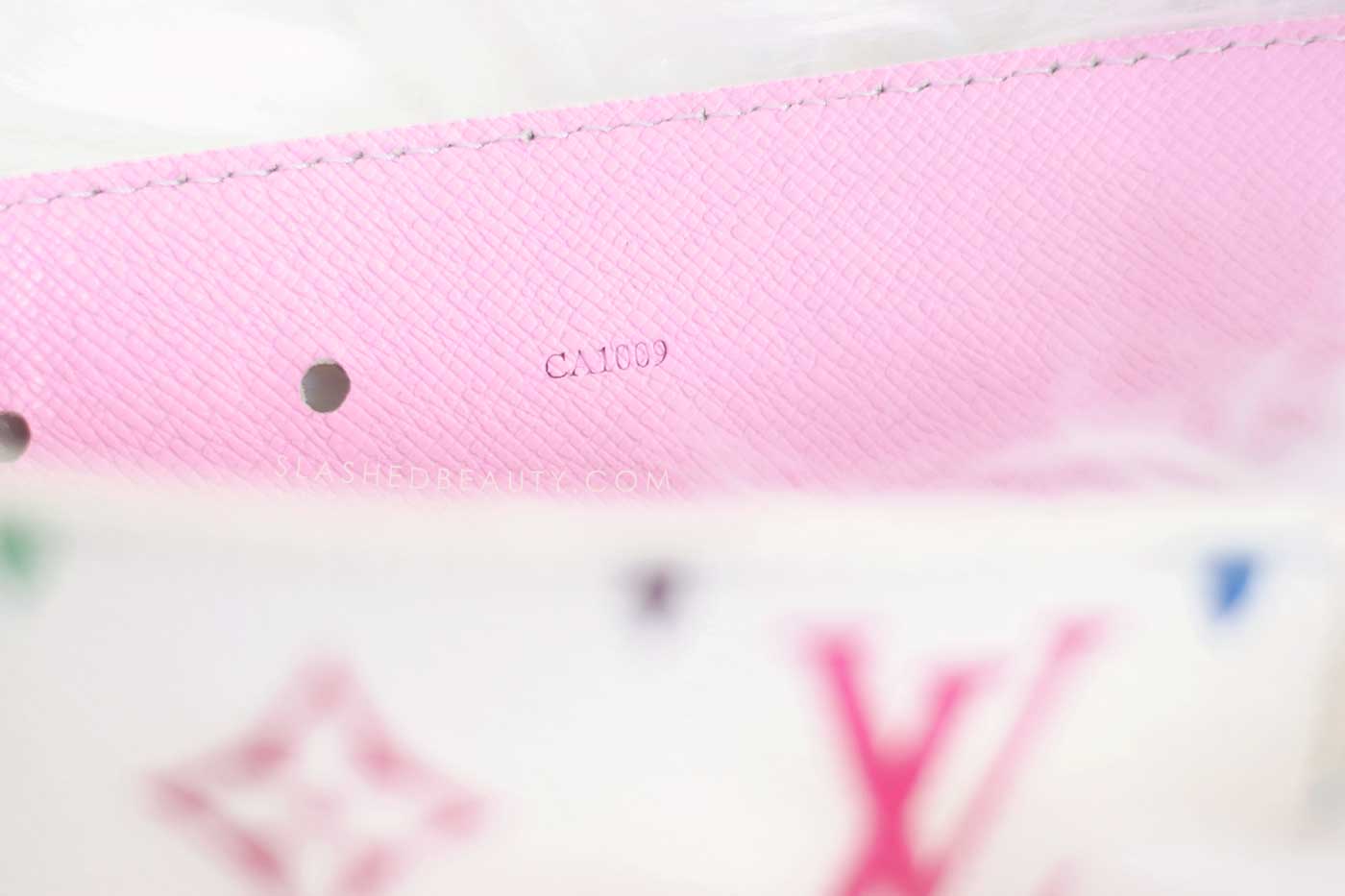 Look up the Date Code: The date code of a Louis Vuitton item indicates the factory location where the item was produced, as well as the week/year it was made. Date codes vary depending on when the item was made, but modern styles will contain two letters followed by four numbers. To check if the date code is valid, you can use a site like the Louis Vuitton Product Code Calculator. Once you enter the code, it will tell you the data related to that code. Cross reference this information with the brand stamp. Does the “made in” label correspond to the factory location the date stamp reveals? Does the date of production make sense? (ie. If it was made 10 years ago, does the belt look 10 years old? If it’s a discontinued style, make sure the date doesn’t reflect a recent year).

Find a Comparison Photo: Finally, check out some photos online of the real deal. This is another way I could have avoided buying the fake Louis Vuitton belt I took home after everything else checked out. I checked the color pattern of the belt— which was correct— but missed the details on the back! On the back of my belt, the model number was printed above the size label, which I found out should have been the other way around when comparing to photos of the authentic belt online. Something else I didn’t notice right away: the size label didn’t make sense. Louis Vuitton uses #/# labels, with the top number describing centimeters and the bottom inches. Not only was mine upside down, but it read 38/110 which doesn’t convert correctly. It should have either been 96/38 or 110/44.

Bonus Tip: If it’s too good to be true, it probably is. Louis Vuitton products hold their value well, so there’s not a lot of reason for a seller to give you a steep discount even on a pre-owned item. As tempting as the good deal may be, an absurdly low price should be your first red flag.

Hopefully these tips can help you spot a fake Louis Vuitton belt so you don’t make the same mistake I did! If you’re purchasing any designer item from a third party seller, be aware that there are really great counterfeit replicas out there. It’s best to only purchase from someone you trust or with proof of authenticity. Resale sites like TheRealReal and Fashionphile guarantee the authenticity of designer items they sell, or your money back.

Have you ever accidentally bought a fake designer item before?