Do you ever look at your shower and think: who designed this? I had that exact thought last week, realizing that a small 5 inch x 5 inch ledge was the only designated space for products in my master bathroom stall shower. 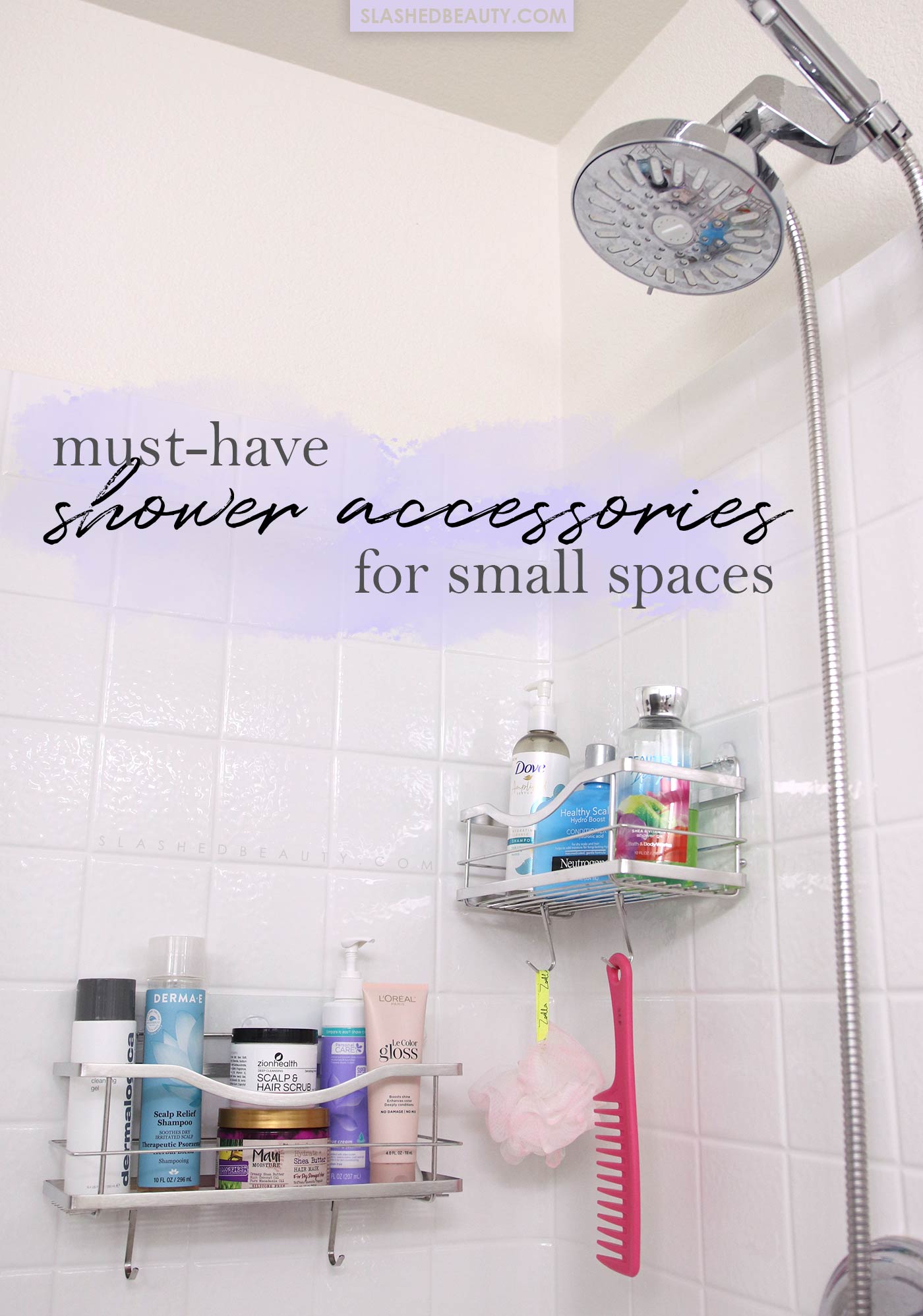 Now, please tell me I’m not alone in saying that aside from the basics (shampoo, conditioner, body wash), I also keep a few other body care items in my shower such as shaving supplies, face wash, a comb and loofah. On top of that, my husband has his own routine as he has a drastically different hair type than me. Other small inconveniences I noticed: the water pipe is extremely high up on the wall, making it difficult to adjust the shower head for me as a 5’4” woman. And then there was shaving. There’s a small 1-inch ledge across the bottom of the shower, but it’s too shallow to offer much stability when shaving. After three years in this house just dealing with it, it was time to give my stall shower a makeover! 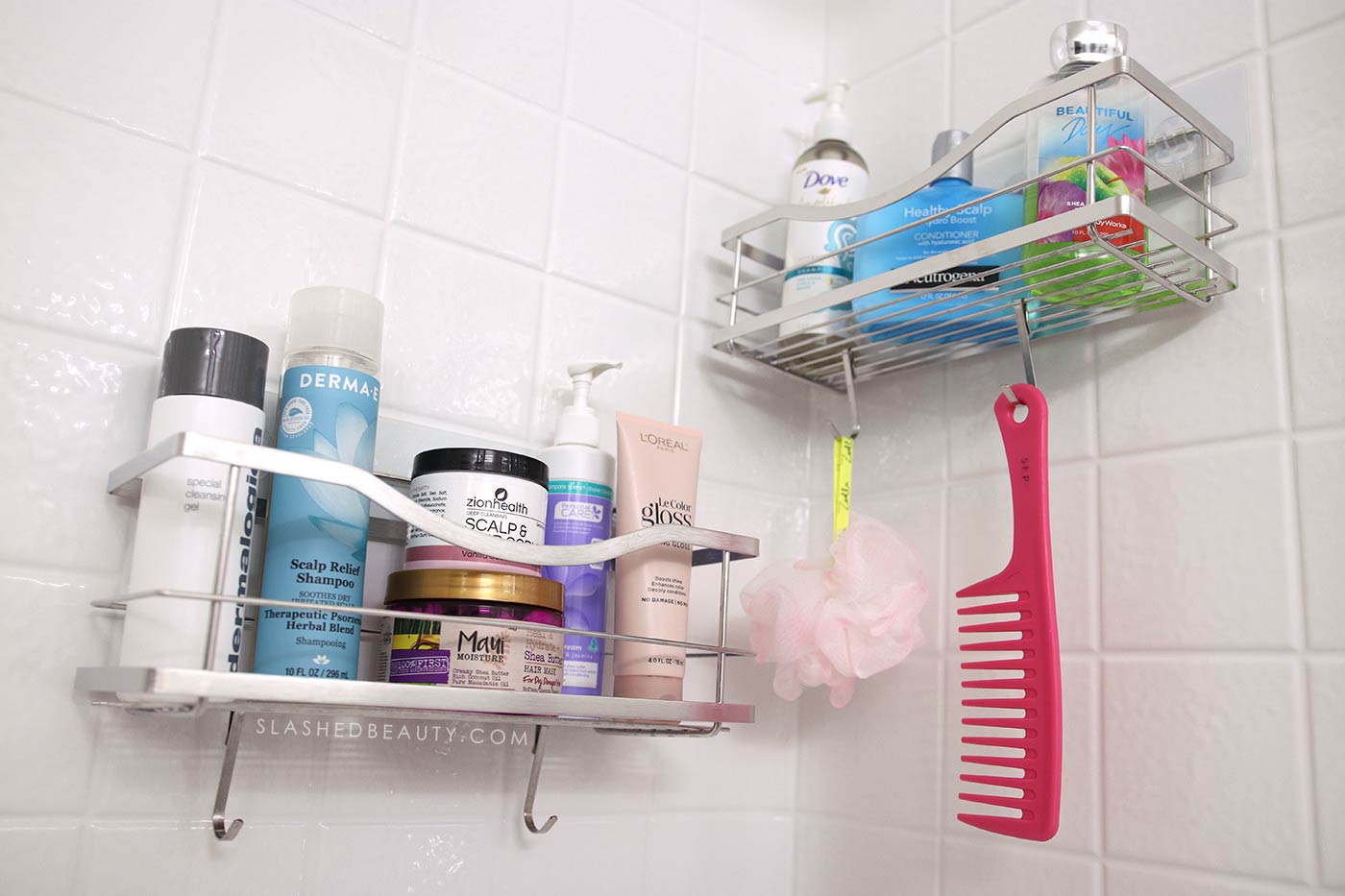 The first thing on the list: product storage. My priority was a strong hold that wouldn’t send my products toppling in an avalanche mid-shower (or in the middle of the night!). After scouring Amazon, I found the KINCMAX shower shelves with over 5,000 reviews and a 5-star rating. The shelves hook on to a powerful waterproof adhesive, and includes four hooks for hanging various things like loofahs or washcloths. I was a bit nervous about them, since my shower tiles have a rippled texture which has made suction cup solutions unusable. When applying the adhesive panel, I pushed hard and also massaged as many air bubbles out as I could. It’s been a week now and the shelves are still up and sturdy. The weight limit is supposedly 30 pounds… I’m sure my products don’t come close to that but the shelves are still full with mostly-new products! I do want to note that one of the baskets is taller than the other, so I think they look better when used either stacked on top of each other or diagonally versus side by side. They’re 100% rust proof and I love the sleek finish!

Next, I looked for something that could help making shaving my legs easier. I found the Changing Lifestyles Foot Rest and decided to take the gamble. It had very mixed reviews, with most people complaining about it either slipping or falling off the wall completely, but I was willing to give it a shot. It features a tightening lever on the bottom of the foot rest to help secure it to the wall. I pressed the suction cup hard against the dry tile while pulling the lever down, and I got a very secure mount on the first try. Even after it got wet, it’s stayed in place through several showers. It’s important to note that this isn’t meant to support a ton of weight, but rather just your foot to help you balance. I still keep most of my weight on my standing leg, but shaving is much more comfortable now and I have an easy 360 reach around my leg. 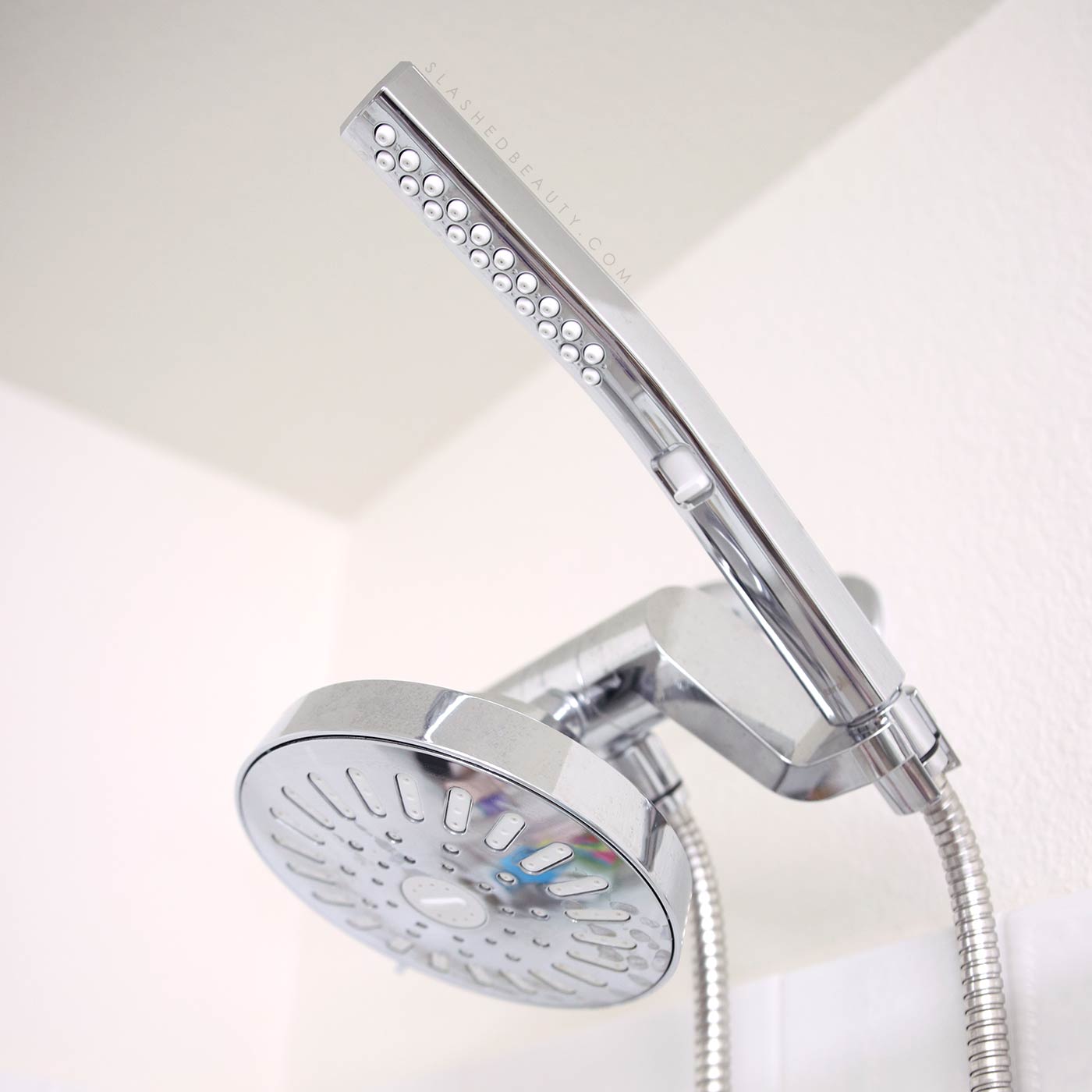 Finally, I want to mention my shower head which I actually installed about a year and a half ago. In order to solve the high pipe issue, I replaced our stationary shower head with a shower head/wand combo so I could get more precise with water flow using the handheld. The Waterpik BodyWand Spa System is a compact rain shower head with an adjustable and detachable handle attachment. The shower head itself has four modes from soothing rainfall to power pulse massage, and the the wand has two modes including a Power Comb spray that makes rinsing your hair a lot easier. The wand offers strong pressure and a comb-like arrangement of the nozzles. This alone really made our shower experience feel upgraded! You can isolate the flow to the shower head only, wand only, or both at once. If you’re looking for something more compact, check out this single detachable shower head from the same brand!

These three shower upgrades made a huge difference to my shower routine. Just a little bit more convenience makes the experience an enjoyable one where I can really consider it more than hygiene and body care, and more like self care.

Have you added anything to your shower to make your routine easier?

These $22 Clean Drugstore Perfumes Will Be Your Spring Go-Tos
Function of Beauty: Is Customized Hair Care Worth the Splurge?
2021 Holiday Beauty Value Gift Sets $50 & Under Gift Guide
11 Beauty Stocking Stuffers $15 and Under Gift Guide