Affiliate Links
If you’re here from James’ tweet, thanks for stopping by! Please consider subscribing to me on YouTube:

As you may recall, James’ first products with the brand came out around this time last year, and faced mixed reviews of both massive praise and criticism. My personal opinion: it’s an excellent palette that can deliver endless high-impact looks, both vibrant and neutral. At $39– or less, using coupons either at Ulta or Morphe– I consider it reasonably priced for the amount of shades and possibilities you get. As much as James tends to find himself in the middle of both personal and professional drama, the palette stands on its own. 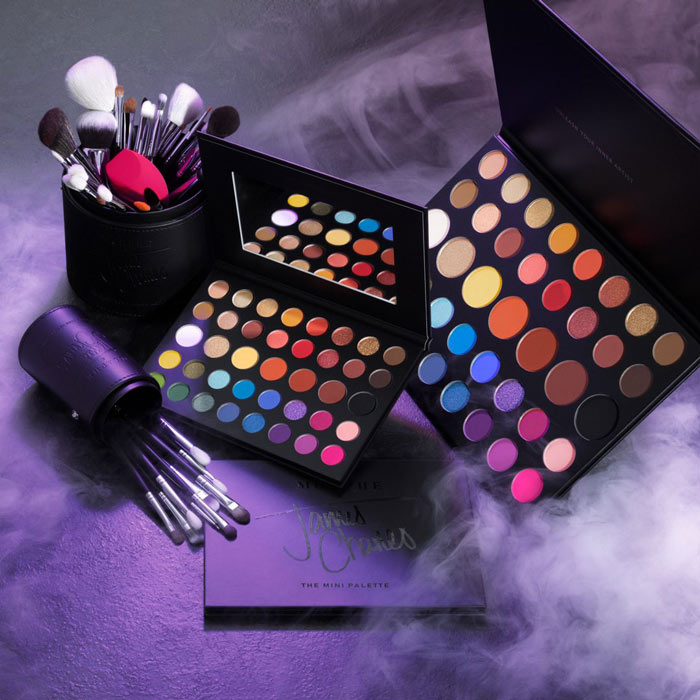 The new James Charles x Morphe Mini Collection has many fans up in arms now, calling it a “blatant money grab” and “scam” because the palette contains the exact same 39 shades, but in smaller packaging that now contains a mirror. Some criticized the lack of creativity, expecting a brand new palette.

In a YouTube video revealing the new collection, James discloses that he turned down the opportunity to create a brand new palette with Morphe and explains, “I was so proud and so confident of the color scheme that we created with the original James Charles x Morphe palette— and that these colors could truly create any single look— that I felt like if I brought out a palette of new colors, I’d be scamming people. Like, going back on my word because you literally can create any look with this palette.” 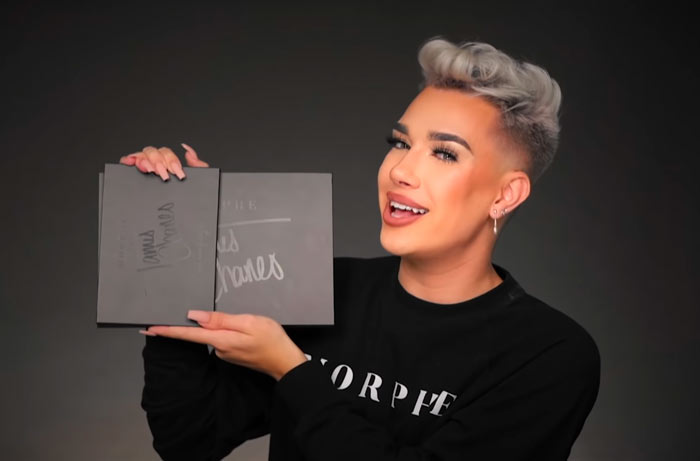 And so instead of crafting a new palette, James and Morphe sat down to discuss how they could make the original product better. Reviewing feedback from those who purchased and reviewed the original palette, they took note of the most common complaints such as the size, the lack of mirror, and the price— all three drawbacks I mentioned in my own review. James himself admitted that he personally experienced how cumbersome traveling with the original palette was over the past year, as well. The new mini palette addresses all of these concerns and creates a more consumer-friendly version of the original artist-focused palette.

The mini version is almost exactly half the size of the original (see above photo for comparison), has a built-in mirror, and contains the same 39 shades and formula for only $26 full price. The collection also features a 13-piece brush kit including James’ favorite eye brushes from the original set, sold separately.

James Charles: “I’ve been working on this for so long”

This new James Charles and morphe launch is so fucking stupid and such a blatant money grab like- pic.twitter.com/qs7ucDKM0U

Lol you’re telling me my parents spent 200 dollars on the James charles palette & brush set when a year later he’s coming out with smaller sets for about 80 dollars? Sounds like a deliberate scam to me.

The negative attention this launch is receiving is the epitome of a damned if you do, damned if you don’t situation. James and Morphe took constructive criticism, used it to perfect an already pretty good product, and are now being dragged for it. Yes, a new palette would have been exciting, and fans who had been expecting that may find themselves disappointed… especially when this announcement comes at the same time as Jeffree Star’s new Conspiracy Palette with Shane Dawson.

However, I have a lot of respect for James standing by his original concept while admitting that it could be improved upon. This is the palette that should have come out in the first place. This is the palette I would have bought instead, had both versions been available at the same time. Yes, it’s a bummer that a “better” product is coming out after I invested in the original, but I’m personally going to try to sell my larger palette in order to buy the new one. I have only used it a handful of times because of the downsides improved in the mini version. James himself wrote in an Instagram caption and tweet, “This collection isn’t some crazy new launch that you guys HAVE to go buy— it’s for my fans and fellow artists who have supported me.” That doesn’t sound like a strictly money-making marketing plan to me *shrug*.

I'm super excited about this mini collection because we got to make improvements that people asked for! If you already have the first one, this isn't some "crazy new palette that you HAVE to go out and buy!" – it's something for my fans and fellow artists. That's all! ☺️

James is one of those public figures that will come under fire for any decision he makes, but I’m here to call BS on the outrage over this launch. It’s no different than new iPhones being released every year with only minor tweaks. I wish more beauty brands were as receptive to consumer feedback and made changes accordingly.

For those of you who skipped the original palette due to cost or the other common concerns, I highly recommend picking up the mini. This is now the ideal travel palette, and really perfects the “do-everything” angle of the original launch. The James Charles x Morphe Mini Collection is available on October 17th at Ulta Beauty.

What do you think of the new James Charles palette controversy? Do you think this release was needed, or redundant? Share your thoughts in the comments!